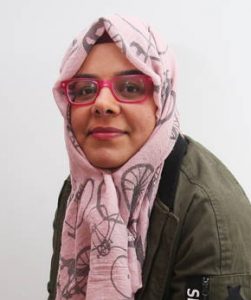 Shelina Merani’s exploration of culture, countries, and comedy really began when she was just four years old. That’s when her family moved from Kenya to Calgary, Canada. Shelina describes her family life as a very strict, immigrant household.

Although her upbringing may have been sheltered, she was inspired to journey abroad as a young adult by an older brother who travelled and a coincidental encounter with a couple of English backpackers. But, the wheels were really set into motion, so to speak, when she accidentally crashed her father’s car into a 7-Eleven.

“The crash was a horrible experience with the insurance company, but it was also, in a way, very liberating,” she explained. “That moment was a catalyst for me to break out of my shell. I was going away to find myself.”

A week later, after freeing herself from the insurance mess, Shelina booked her trip through Travelcuts and Eurail to backpack solo around Europe – an experience she said altered the course of her life and rocked her world. She went from being unmotivated about her education to pursuing a degree in fine arts. “It was like something expanded in my brain when I travelled. I felt smarter and I wanted to live in any city that reminded me of Europe.”

It wasn’t only her mind, but also Shelina’s worldview was completely transformed, as she experienced new countries and cultures. When Shelina returned to Canada, she studied in Quebec City. There she met her husband who is from Djibouti. Her cultural exchange continued as she fell in love with a person from another country, learned French and converted to Islam.

Immigration, backpacking, and an intercultural marriage might be enough culture exchange for most people’s lifetimes, but Shelina’s journey led her to another unexpected destination- the comedy stage. When Shelina was asked to participate in a talent contest organised by a local Muslim women’s group she decided to perform a stand-up act, despite not having any previous experience in comedy. “After the first performance, I was like, wow, people really loved it,” she said. “Except for Muslim men. They don’t tend to find my jokes funny since they are often the butt of my jokes .” 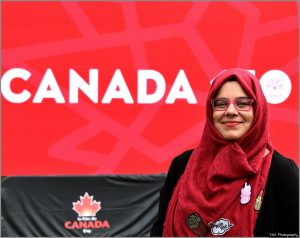 She was, however, a big hit with the Muslim women in the crowd. Shelina was invited to perform in front of other Muslim audiences. Then, she was contacted to audition for the hit show, ‘America’s Got Talent,’ an opportunity she nearly didn’t take because she assumed it was a joke.

Shelina realises the current political climate in the United States likely influenced the show’s producers to reach out to her, but she insists she didn’t get into comedy to break stereotypes or change minds. “Ultimately, I am just trying to be funny. The realisation came after I got into it that I am building bridges and, in a way, humanising Muslims. I reinforce stereotypes with my jokes, but then I also break them down by taking ownership of the misconceptions.”

While she didn’t make the final cut to participate in this season’s ‘America’s Got Talent,’ Shelina plans to try again.  In the meantime, she is committed to focusing on her craft and fine tuning her jokes. She recently emceed a Canada Day celebration in Ottawa at the Museum of History. She’s  also hitting local comedy clubs- where she said she scores the most laughs. Plus, Shelina is a keynote speaker at the upcoming 2017 World Youth and Student Travel Conference in Montreal. The conference, which is held 26-29 September, is the largest global trading event for travel organisations focused on travellers ages 18-35. Shelina will give her address on Friday, the final day of the conference.

No matter which stage she is on, Shelina’s comedy gives her audience a better sense of what it is like to be Shelina Merani: the scarf-wearing, hummus-loving, joke-telling traveller, wife, parent and Canadian. “I love making people laugh and I am hoping my humour will make people see Muslims and Islam in a different way. I mean, we have shared universal values: Muslims also hate Monday mornings,” she said.