Each year WYSE arranges for delegate volunteers to spend some of their time in the local community making a contribution to improve the lives of those less fortunate. 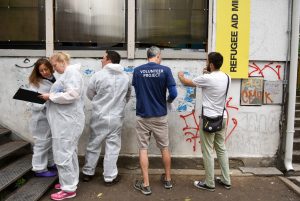 This year the Refugee Aid Miksalište Centre in central Belgrade was the recipient of this support. The centre was repainted this morning by 24 WYSTC delegates, who have volunteered their time and ‘got active’ before the offical start of this year’s event. The group broke into 3 teams of 8 and worked to freshen up 3 separate parts of the centre. The intention being to give the centre a better look in view of the local community and to give the refugees somewhere brighter that they are happy to congregate.

Kim Burdett, a consultant for student mobility programs, and one of the volunteers said she participated directly after a 32 hour flight because – “I encourage our students to participate in local volunteer projects like this, so I need to walk the talk”. She added that she wanted to put a face to the statistics about refugees from Syria that we are all seeing on television.

The centre was very busy when the group arrived and there was interest from both groups in seeing what the other was doing. By donning bright white painter’s coveralls the volunteers must have looked an unusual sight.

Miksalište is currently processing 400-500 refugees per day and offering the basics to life; food, clothing & shoes. Plus primary medical assistance, language skills and cooking classes and a cultural exchange education programme. Refugee Aid Miksalište has helped around 150,000 refugees. Some 40 per cent of the refugees are from Afghanistan, 30 percent from Syria, 20 percent from Iraq and 10 percent from other countries.

Tajana Zadravec, Project Manager at Mikser House said “1,300 volunteers from 60 countries have spent time at this new centre, or the previous location in a little over a year”. 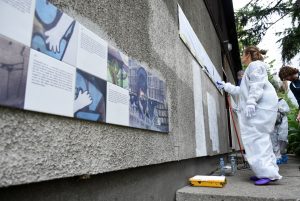 She added “there are an estimated 5-6,000 Syrian refugees in Serbia and 1-2,000 of these are in Belgrade.” The centre is now at full capacity and is now only able to process the most at risk cases. These include young families, children travelling alone, the elderly and those with medical conditions.

The Syrian crisis is ongoing with the latest peace talks falling apart only this week. Also, 18 UN aid trucks were bombed last night and 12 aid workers are now dead. It is estimated that 600,000 Syrians in the most war torn areas are out of reach. What will happen to them? One might ask.

Refugee Aid Miksalište is supported by the Norwegian Embassy in Belgrade and a large number of national and international NGOs. The centre is now paying rent on the current privately owned property, a real drain on limited finances. However the Serbian government is maintaining at open doors policy to refugees, with the State Secretary at the Ministry of Labor, Employment, Veteran and Social Affairs Nenad Ivanišević confirmed that the Balkan route was not closed to refugees, that Serbia has a positive policy towards refugees, and that it wishes to help all those who come into the country.

‘Serbia will not change its policy. Anyone who comes to Serbia will be accepted.’

Disappointingly, only 600 of the estimated 150,000 refugees coming to Serbia have indicated an interest in remaining here. It seems they all aim for Europe. One wonders if Serbia’s application (22 December 2009) for EU membership was progressed more quickly if this attitude might change. Serbia’s accession negotiations continue and the likelihood of joining eventually remains strong.

If you wish to read more about Refugee Aid Miksaliste and their programs please go to refugeeaidmiksalliste.rs